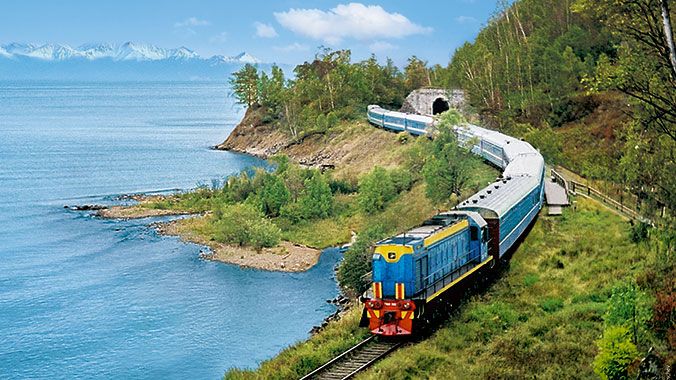 Like the idea of taking the road less travelled and relish the adventure of old world travel by trains as oppose to modern travel by plains? Want to marvel at the silver birch trees en route? Want to lose track of time as you span across 10 time-zones of nearly 2 continents - Europe & Asia? If you want to experience all of this, then The Trans Siberian Railway journey is a great way to do so.

The Trans-Siberian train certainly does not offer too many creature comforts: primitive heating (coal fire), bunk beds, pelmeni and borscht for food and a lack of showers make for a certain kind of charm that doesn’t appeal to everyone. The lack of internet connectivity and limited facilities for charging your phone are blessings, because you are forced to disconnect from your devices. But everyone seems to be enjoying themselves, possibly on account of some Russian champagne, along with snatches of conversations, interspersed with cat naps every now and then. It is getting back to basics in the best possible way.

Step One: Planning your Route

The Trans Siberian Railway was built between 1891 and 1916, to connect Moscow with the far off city of Vladivostok. Covering a massive distance of 9,258km. (For perspective, India measures 3,214 km North to South). Trans - Siberian or Transsib takes on three different routes that traverse Siberia from Moscow.

All three routes take 5–7 days if going non-stop. Most travellers start their journeys in Moscow and go east. You don’t have to stay on the train the whole time. As fascinating as the train journey is, sitting on a train for so many days can test your patience. It’s recommended to travel a particular section of the route, or break up the journey with multi-day stops in various destinations. You can always hop on to the next train that passes by your stop. However, you’ll need to purchase individual tickets for each leg of your journey.

Read about our personal Trans-Siberian experience, featured in the Outlook Traveller Magazine.

Which Route to Take?

Where to Stop Along The Way?

The starting point destination of Trans-Siberian railway – Moscow, is a city that needs to be explored. With places of rich history like The Ancient Kremlin Fort, Saint Basil Cathedral and State Historical Museum, history buffs will never be bored! Truly the heart and soul of Russia, the Red Square is the most popular spot in Moscow. If you enjoy food, Moscow has got your back, with tons of casual and Soviet-era themed restaurant for the people who love history AND food! The Moscow Metro is considered as the most beautiful underground on the earth because of its ornate architectural style. The Moscow metro system has more than 15 lines and 232 stations. One MUST ride through it when in Moscow.With a great public transportation system and a ton of festivals and events always happening, Moscow will definitely boggle your minds.

Nicknamed the ‘Venice of the North’ for its beautiful canals, St. Petersburg is an all season city. The Russia’s imperial capital with its sheer grandeur and culture never fails to impress. Explore the exciting art collections of the Hermitage, pay a visit to the Russian Museum, and soak in the splurge of luxury at Peterhof Palace and Winter Palace. Visit the iconic Peter and Paul Fortress, the original citadel of St. Petersburg.

St Petersburg has been called one of the most artistic cities in the world, and there are many reasons for such a designation. The city has proven to be a home for the collection of all types of artistic soul's work, now and then.

Highlighted by traditional wooden architecture, restored churches, and historic monuments, the prosperous city of Irkutsk is one of the most popular stops in Trans-Siberian railway and is also the gateway to the tranquil Lake Baikal. This lake is biggest, deepest, oldest and one of the most beautiful lakes on Earth. Baikal is amazing, and it's not for nothing that Siberians call it not a lake but a sea. Water is unusually transparent, so that you can see through it, as through air. Winter Baikal is a real fairy tale land – transparent ice, bright sunshine from which you can even get a tan, and at the same time freezing temperatures. Standing on the deepest lake in the world when it is frozen is quite surreal!

Visit the Baikal Museum and Nerpinary that houses Nerpa Seals, the only seals in the world that live in fresh water. Try the local trendy restaurant serving the traditional Pelmeni & Vareniki. Plan on a day trip to Listvyanka, a small town on the shores of Lake Baikal which is a popular starting point for summertime wildlife-spotting tours, plus wintertime ice-skating and dog sledding.

If you are interested in culture, then you must check out Kazan for sure. Why you ask? Kazan is where you can find an equal number of Russian Orthodox churches and mosques. It’s not just that, the way the city has blended the Christian and the Muslim culture together is simply astonishing. Referred to as ‘The third capital of Russia, Kazan offers a colourful look into the past and is an interesting city to stop by.

Given its proximity to Mongolia, the unique Russian city of Ulan Ude has a typical Asian flair to it. Ulan Ude is the capital of Buryatia, home to Russia’s largest indigenous people, the Buryats. Visit the small museum on the history of Buryatia. Ulan Ude is also a center of Buddhism in Russia. Ulan Ude offers a plethora of opportunities that include hiking, horseback riding, fishing, and boating. The atmosphere here is incredibly friendly and it is ideal that you explore it in a relaxed way.

Ulanbaatar is the capital and gateway to experience true wilderness of Mongolia. Having travelled so far, it’s highly recommend that you take a flight from Ulaanbaatar to Dalanzadgad for a visit to ger country. Highlights that you should not miss are the Khongor sand dunes, the flaming cliffs or Bayanzag, and the Valley of Yol. Do not forget to pick up a bottle of the famous Genghis vodka. And visit the cashmere shop at Ulaanbaatar.

Have more time in hand and want to do plan a trip to Mongolia and Gobi Dessert? Our travel guide on how to plan your getaway to Mongolia might help!

Located in the northern part of China, Harbin is a winter wonderland filled with snow and ice. The first thing you should know is that it's very very cold in Harbin in winter, but it has the world's largest Ice and Snow Festival. Harbin is also known for skiing at Yabuli and the great Russian architecture around St. Sophia.

Hosting an array of historical sites and modern masterpieces, Beijing is an incredible mix of the old and the new. Few places on earth can match the extraordinary historical panorama on display in Beijing. At its heart is the magnificent Forbidden City, a royal palace on a scale like no other. Beijing is also home to sublime temples that aspire to cosmological perfection, while the city centre is criss-crossed by enchanting hútòng: ancient alleyways that teem with life today, as they did hundreds of years ago. And, to cap it all, the awe-inspiring Great Wall snakes its way across the hills north of town.

Step Two: How to Book Your Tickets?

Once you decide your route, this will next bring you to the question of how to book your tickets? Here's your answer:

How much does the train journey cost?

How much you spend on your train journey will depend on all of the factors mentioned below. The price range for the Trans-Siberian is wide, as there is a variety of trains and classes to choose from.

Important Information to know for the Trans-Siberian Journey:

If you are planning to ride on the Trans-Siberian, it is recommended that you carry Russian Visa, Mongolian Visa (For Trans-Mongolian route), and Chinese Visa (For Trans-Manchurian route). For all these visas, it is mandatory that you have at least one blank page and that your passport is valid for a minimum of six months from the date of travel. While the process takes less than 10 days, it is essential that you apply 30-45 days in advance.

The currency along the Trans-Siberian ride changes from Russian Ruble to Mongolian Tugrik to Chinese Yuan. While there are a lot of ATM’s along the way and at the stations for you to exchange, it is recommended that you carry enough local currency during your journey. There is nothing more stressful than disappearing off into the darkness at a remote station in search of an ATM knowing you have 3 minutes before the train moves on.

How to Get there?

You can travel on the Trans-Siberian all year round. Naturally, the summer months from May to September have the best weather and the longest daylight hours so are the most popular.

Is travelling eastbound better or westbound?

You can travel the Trans-Siberian Railway either eastbound or westbound, it's up to you, although eastbound tends to be more popular among tourists, perhaps because most of the westerners go out by rail from their local stations and fly back home from the end destination.

So don't worry, you'll be safe and snug.

Russian trains used to run according to Moscow time whilst in Russia, even if local time was 7 hours ahead of Moscow.  However,  RZD Russian Railways ended this century-old practice from August 2018 and now use local time in all their timetables and booking systems.

What to expect in the train?

Hope this guide on how to ride in Trans-Siberian railway helps. Happy Wandering :)